Nashik – Panchvati is one of the important holyplace of Bharat Varsha, situated on the banks of holy river Godavari. It is located in the state of Maharastra, approx 180 Kms from Mumbai.

Holy City Nasik used to be part of Dandak forest, which is full of holy tirthas and pastime places of Lord Ram, Sita & Laxman and also of Lord Chaitanya Mahaprabhu. Nasik is also famous for its Kumbhamela, which occurs after every 12 Yrs.

Nasik was known by different names in all different yugas. Padmanagar, Trikantak, Janasthan and in Kali it is known as Nasik. Lord Gauranga Mahaprabhu visited Nasik while returning to Puri from his South India tour. He performed Kirtan, took his bath in Godavari, rested for some time & left for Trambak.

Srila Prabhupada visited Nasik in 1869-70 with his American disiples, they perfermed Nagar Kirtan, Dham Parikrama & Public Satsang for many days along with the BTG distribution.

Trambak is famous for one of the Jyotirlinga of Lord Shiva & origin of Godavari i.e Bramhagiri both visited by Sri Chaitanya Mahaprabhu, Trambakeshwar is 30 Kms from Nasik.

There used to be many ancient temples in Nasik on the banks of Godavari numbering 28, destroyed in 1650-60 by Moghul tyrans Aurangazeb. Later in 18th century new temples & ghats were again constructed by the Peshwas of Maratha Empire.

Nashik – Panchvati situated on the banks of holy river Godavari is one of the important holy places (Tirtha kshetra) of Bharat Varsha. 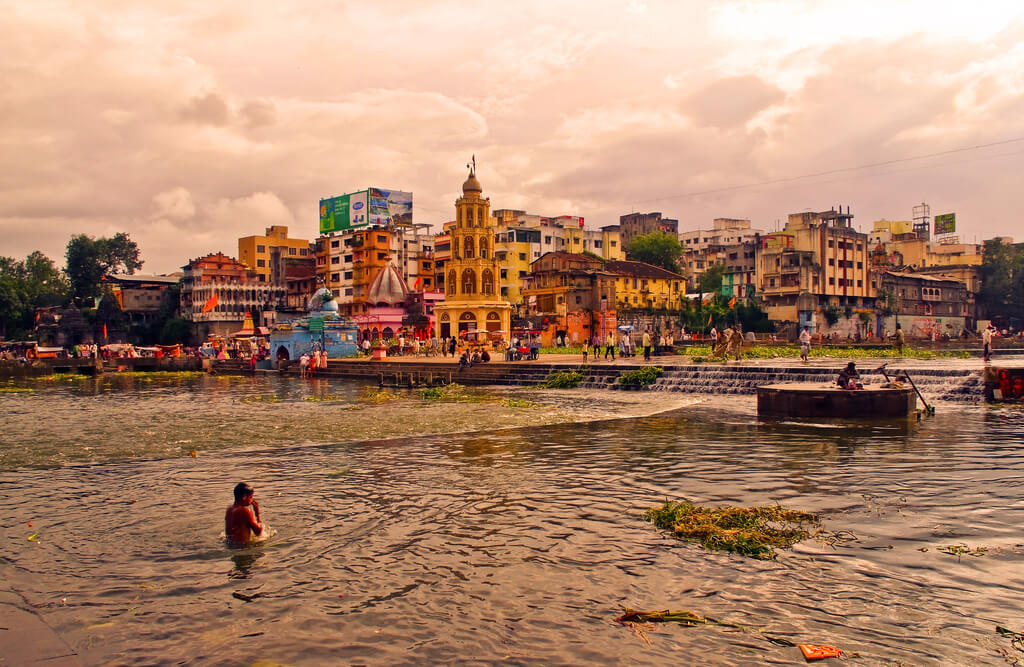 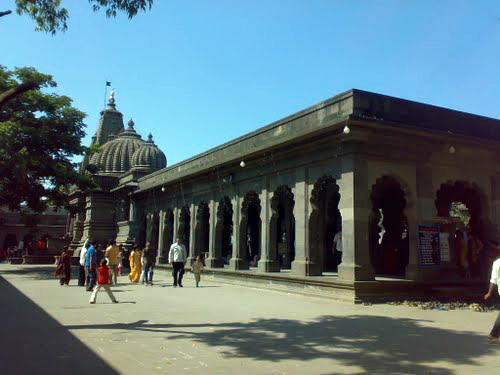 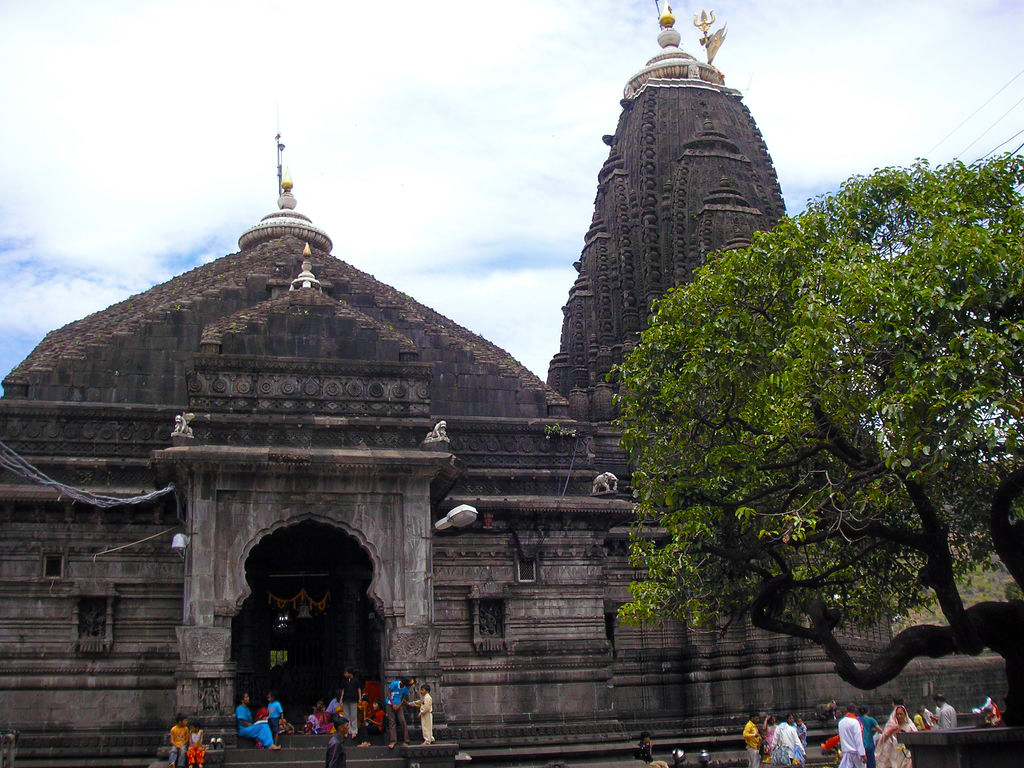 Kala Rama temple is the landmark of Nasik situated in Panchvati. Deties of Sita, Ram & Laxman are self manifested found in Godavari 800 Yrs back to one of the devotee named Dirit Baba. In 18th century there was one great land lord & devotee of Lord Ram named Sri Ranganath adhekar. Lord Rama came in his dream & and ordered him to build a nice temple for himself so everyone can have his darshan. So in 1790 he completed the temple. Sri Ranganath spent his entire wealth for service of the lord with gratitude & devotion. He & his wife spend 23 Lakhs rupees for this temple.

Lord Ram promises in Ramayan, “Anyone who comes to me for shelter, I protect that soul This is my promise”.

Lord Ram’s pose in this deity is of one(left) hand pointing at his lotus feet and other(right) hand is on the chest, proclaiming one who takes shelter of my feet, I personally protect that devotee.

For Nine days Ram Navmi is celebrated here with great pomp. On chaitra ekadashi, a great chariot festival takes place, where lord Ram and Hanuman ride on their chariot, to give audience to all in the city and thousands of people gather to greet Lord Rama, Sita & Laxman with Garud & Hanuman.

Once Sun God had a quarrel with one of his wife Ushadevi. Getting disappointed she came on earth & started to live in the hermitage of the sage at Nasik. Feeling separation from Ushadevi, Sungod came searching for her in this ashram. Ushadevi took the form of she horse & started to run away from Sun God. Sun god took the form of male horse to chase her & all this was observed by 5 gurukulis and they started to laugh at this husband wife dispute. Then Ushadevi cursed these 5 brahmacharies to become banyan trees (Vata Vrksha),so this place became known Panchvati, as Panch (means 5) & vati (means Banayan trees).

Sita Gupha is the Symbolic cave were sitadevi was hidden by Laxmana when Khar & Dushan attacked Lord Rama alone with 14000 demons.

Sita haran temple is situated at Juna / old Adgoan naka opposite of Katya Maruti temple. Here we can see the deity of mother sita giving alms to Ravana in the form of a mendicant. From here sitadevi was kidnapped by Ravana.

Old Parna Kuti is the place where there is Laxman Rekha, the place where sitadevi was kept with agnidev and maya sita appeared. Old parna kuti is just 5 min walk from sita haran mandir towards Kala Ram Mandir.

Once Lord Shiva was suffering bramhahatya, destroying one of the head of Bramha. At village of Govardhan he came to know that RamKund of Godavari can purify him of this great sin. And he learned it from the conversation between a bull and a cow. So after bathing in Ramkund, Lord Shiva settled here as upjyothirlinga and gave respects to Nandi as his guide & teacher that is why nandi is not here in this Kapaleshwar Temple.

Lord Rama used to bathe here along with Sita & Laxman. River Aruna also meets Godavari at RamKund. Here is Asthi Vilay tirth, where ashes are submerged of the diseased and they get dissolved within two hours, thus liberating that person from all the sins.

This is the place where Kumbh Mela takes place after every 12 years. This sacred Kunda is the holiest place in Godavari. During Samudra Manthan few drops of nectar fell here in the Godavari.

Tapovan, 2 Kms from Panchvati is named because many sages used to do tapasya here. Now also many saints devotees have their temple here and they worship Sita Ram here. Kapila – Godavari sangam is here. And this is the place where Laxman cut off the nose & ears of shurpanaka. Its a good place to do Katha – Kirtan in the gardens here. During Kumbha Mela all the sadhu’s stay here in Sadhu Grama.

Here we find the beautiful temple of Laxman as a dedicated servant of SitaRam.

Once upon a time, by the arrangement of yogamaya, Sri Radha cursed one Gopa & Gopika to take birth in martyaloka. The Gopa took birth as a great demon Jalandhar & Gopika bcecame his wife Vrinda. Due to his own power & chastity of Vrindadevi, Jalandhar became unconquerable & thus he defeated all the demigods. Every one approched lord Narayan to get rid of this demon. Understanding the source of Jalandhar’s power in chastity of his wife Vrinda, Lord Narayan took the form of Jalandhar & ordered all the demigods to start war against the demon & when war was in full swing, Lord Narayan broke the chastity of Vrinda devi & thus Jalandhar was killed.

When Vrindadevi came to know about this trick of Lord Narayan. She cursed him to become black stone & thus Lord Narayan became Salagrama. then Lord Narayan gave her eternal memories of spiritual world & she begged forgiveness for the curse. Lord Narayan offered her boon that her body will become River Gandaki, where all shalagrams are found and her heirs will become Tulsi plants to worship and marry with Lord Vishnu.

So here at Godavari Lord Narayan took his bath and got his eternal beautiful form. That is why the deity is called Sunder Narayan. With Lord Narayan there is Laxmi Devi and Vrindadevi, which are worshipped here.

Original temple was destroyed by the maghuls in the 17th century. Later Pandit Chandrachud constructed this beautiful temple in the 18th century on the banks of Godavari.

Out of 12 worshipable places of Lord shiva, tryambak is considered the 1st i.e Adi Jyotirlinga. Puranas relate that Parvati devi was not happy to see Gangadevi on her husbands head. She requested Lord Shiva to release Ganga down, but he was not ready as it was a charnamrita of Lord Vamandeva. So Parvatidevi palanned to make Ganga appear on earth. Gautama, a very elevated sage was having his ashram at Bramhagiri, Tryambak. Jaya, a maidservant of parvati took the form of a cow & Ganesh became a cowherd boy. That time there was a drought in that area. But because Gautam Rishi was very powerful mystic, he used to sow seeds in the morning and by noon he used to get ripened crops and by that he used to feed all sages and brahmanas. So Jaya in the form of cow started to eat all the crops before Gautama Rishi used to come. So Gautama Rishi observed the cow and just to chase her away he used his Kusha grass. As per the plot, as soon as Kusha grass touched the cow, cow left her body and ganesh as a cowheard boy started to cry and shouted that Guatama Rishi had done Go hatya.

Gautam Rishi was in shock, all the brahmanas and sages said, we will not stay at such a place where cow is killed. Then out of genuine humility Gautama requested everyone that he will do all the attonement & will purify the place. Everyone said that if Ganges will flow here & if he bathes here he will be purified & the cow will get back her life.

So sage Gautama did a very sereve penances to please Lord shiva on the top of Brahmagiri mountain. Lord Shiva appeared and Gautama requested to release Ganga, but ganga was not ready to come on planet earth, so in great anger Lord Shiva dashed his locks of Jatas, hairs on the mountain to release Ganga. Even now you can see the marks of shiva’s Jata & Knees at the Jata Mandir. Gangaji disappeared under the mountain. Again Gautama worshipped Gangaji & Lord Shiva, then appeared at Gomukh. Again she disappeared at Patal Loka. Gautama Rishi by the power of his mantra & Kusha (At Kushavarta) made one kund & recieved Ganga there and took bath and offered gangajal to the died cow & immediately the cow came to life. And so Ganga here is called ‘Godavari’ giver of life to cow or ‘Godavari Ganga’.

In this entire episode trinity Lord Vinshnu, Shiva & Bramhaji were very much pleased by the simplicity, devotion & humility of Sage Gautama. So they asked Gautama to take whatever boon he desires. Sage Gautama prayed to them that plz you three stay here forever at this place with Godavari to liberate all the cond souls i.e in Tryambak you don’t find Shivlingam, but 3 shilas of Brahma Vishnu & Shiva together. and Godavari flows under ground & bathes the shilas with her holy waters. Shri Chaitanya Mahaprabhu visited tryambak, kushavart kund & Brahmagiri mountain on his return journey to Jagannath Puri from South India.

The beautiful, current temple was reconstructed by the Peshawas of Maratha empire in 18th century.

Because Godavari was flowing under ground in patala loka. to bring her on the surface of the earth Lord Vishnu with Sudarshan Disc pierced the earth and brought Godavari on the planet earth from the depths of patalaloka. That place is celebrated as Chakratirth, which is between Nasik and Trambak.

This place is known as Sarva Tirth. Taked where great devotee vulture Jatayu fought with ravana. Although mother Sita did not want Jatayu to fight with ravan due to his old age, still, jatayu chose to fight. He fought so violently that even ravana was puzzled. But at last this unequal fight Ravana cut off the wings & back past of Jatayu, who was 60,000 years old. When Jatayu was vomitting blood, Ram & Laxman came there in search of sita, & Jatayu informed Rama that Ravana stole sita & has taken her towards the south.

Due to intense battle the old bird was very thirsty, so he asked for water, then out of love for his own devotee Lord Ram, invited all the tirthas. He piereed an arrow in the ground and quenched the thirst of his devotee. Even now that same water stream is flowing and forming the holy tank in taked. Lord Ram, personally performed all the last rites of Jatayu with Laxmana, like he would have performed for his father, which he could not perform for his own father Dasharath.

In ancient times, Kapil Muni the son of devhuti had his ashram here. Some local sadhus say that this is the place where he instructed his mother, devhuti about sankhya-yoga. Since then streams of holy water is flowing there called Kapil Dhara.

As per the opinion of some Ramayana Commentators, Devi Parvati once wanted to test the identity of Lord Rama and she did it here by taking the form of sita.

While bringing sanjivni herb, Hanumanji killed here one demon called kalanemi and so this place is known as Kawnai.

When Chinease traveller Hsuan Tsang was travelling here at Kapil Dhara there was a huge university teaching sankhya yoga which was flourishing and he gifted a chinese gong (bell) to this Gurukula.