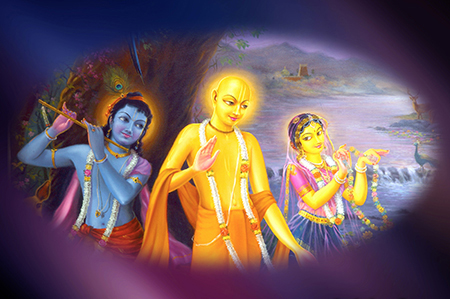 In Nasik, this grand event is celebrated with an evening festival of lecture, drama and wonderful kirtan. Kirtan is the loud chanting of the maha-mantra Hare Krishna Hare Krishna Krishna Krishna Hare Hare Hare Rama Hare Rama Rama Rama Hare Hare taught by Lord Chaitanya as the easiest yoga process for the age we live in. A sumptuous feast is served after the programme and Lord Chaitanya’s birthday cake is distributed to all those present. This festival takes place in March/April and signals the beginning of the Vaishnava calendar. Devotees fast until moonrise. 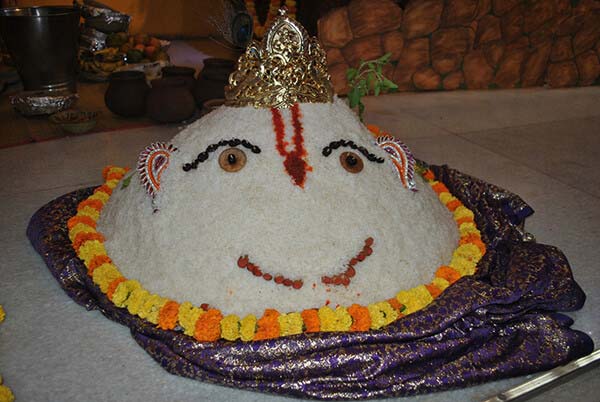 Traditionally, the residents of Vrindavan including Nanda Maharaj and all the cowherd men would annually worshipped Indra, the King of Heaven, who is responsible for supplying water.

However, Krishna convinced his father to forgo the sacrifice to Indra and instead worship Govardhan Hill. He explained to his father Nanda Maharaj “This cosmic manifestation is going on under the influence of three modes of material nature—goodness, passion and ignorance. These three modes are the causes of creation, maintenance and destruction. The cloud is caused by the action of the mode of passion; therefore it is the mode of passion which causes the rainfall. And after the rainfall, the living entities derive the result—success in agricultural work. What, then, has Indra to do in this affair? Even if you do not please Indra, what can he do? We do not derive any special benefit from Indra. Even if he is there, he pours water on the ocean also, where there is no need of water. So he is pouring water on the ocean or on the land; it does not depend on our worshiping him. As far as we are concerned, we do not need to go to another city or village or foreign country. There are palatial buildings in the cities, but we are satisfied living in this forest of Vrindavan. Our specific relationship is with Govardhana Hill and Vrindavan forest and nothing more. I therefore request you, My dear father, to begin a sacrifice which will satisfy the local brahmanas and Govardhana Hill, and let us have nothing to do with Indra.”

ISKCON temples across the world celebrate Govardhan puja annually by decorating and worshipping mountains of foodstuff which symbolize Govardhan mountain. 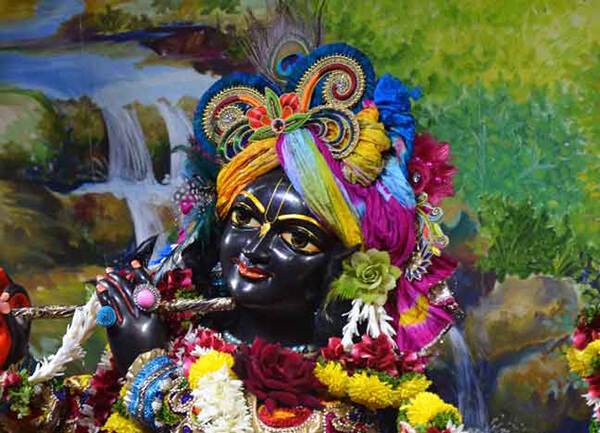 Krishna appeared in Vrindavan, India, 5 000 years ago. His transcendental appearance day, celebrated every year in August or September, is Krishna Janmashtami. Krishna Janmashtami is the grandest of all Vaishnava festivals. The celebration begins at 4.30 a.m withmangal-arati. The temple room is full of devotees anxious to have early darshanof the Lord on this special day and kirtan is especially enthusiastic. The greeting of the Deities takes place later than usual to allow the pujaris to decorate the Deity room and to dress Krishna more opulently and gorgeously in a new outfit usually embroidered in India.

All day, there are readings from the Krishna Book and bhajans in the temple room. In the kitchen, devotees prepare a big feast of at least 108 varieties of preparations to be offered to Krishna at midnight. Nearly 9,00,000 devotees visit the temple this for taking the Darshan of their Lordships for Krishna Janmashtami. A 50 000 square foot main tent is erected for the main evening programme of kirtan, bhajan, drama, dance, lecture and abhishek. A guest speaker is invited from overseas for the occasion. Smaller tents host booths explaining our philosophy, presenting local projects, and selling sweets, savouries, books, CDs and cassettes, and other devotional paraphernalia. We also have booths for children and a big prasadam tent, serving a free hot meal to all our guests. For the inquisitive young visitors, at ISKCON Nasik, we offer a special tent hosted by the ISKCON Youth Forum. They offer transcendental fun like you’ve never tasted before: chanting Hare Krishna , dramas and cultural programs. The grand abhishek (bathing the Deity with auspicious substances) which is at 11.30 p.m and the midnight arati are highlights of the evening tent programme. Fasting is until midnight. Devotees break their fast with ekadasi prasadam and get ready for the next day, which is Srila Prabhupada’s Appearance day festival. 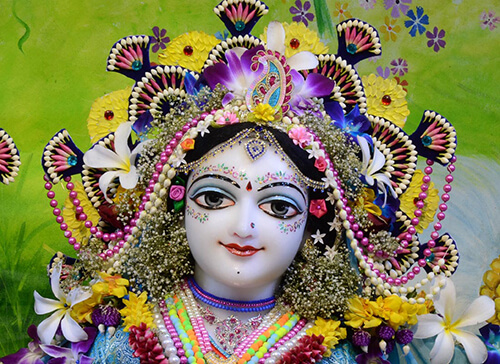 Radhastami is the celebration day of Srimati Radharani’s appearance. Radharani is the consort of Krishna. She appeared to Vrishabhanu Maharaj (her father) in the village of Rawal a fortnight after Krishna’s appearance. Radharani’s special qualification is that She is the best devotee of Krishna. Krishna therefore loves Her the most. On Her festival day, devotees seeking Krishna’s grace will especially ask Her to grant them devotion to Her beloved Lord, knowing that if they can attain Her favor, they can attain His as a natural consequence.

The festivities on Radhastami includes darshan of Sri Sri Radha Rasabihari in new outfits, spiritual discourses, kirtans and bhajans, maha-abhishek, maha-arati and offering of hundreds of bhoga foodstuffs to Their Lordships. The special highlight of the day is a magnificent boat festival where the Utsav-murti of Sri Sri Radha Rasabihari are taken on a flower bedecked silver boat in the temple courtyard. 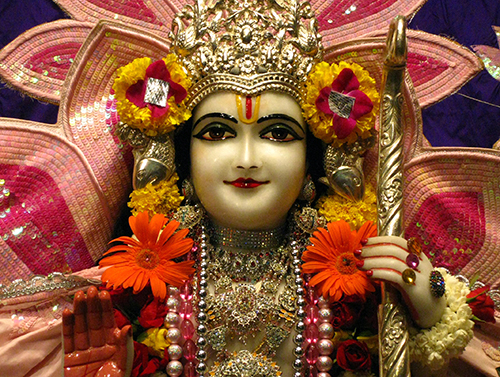 Lord Ram is the most popular incarnation of Krishna. His transcendental adventures told in Valmiki’s Ramayana are famous throughout the world.

Lord Ram was the ideal monarch and his virtuous life is a perfect example for everyone in family life to follow. Narrations of his affectionate dealings with his family and devotion to His wife, Sita Devi, have enchanted generations of devotees. Lord Ram’s worship is very popular in Mauritius and almost every Hindu is a Hanuman bhakta. Hanuman himself was a great devotee of Lord Ram.